Recently, I wrote about the importance of tuning into your emotions. What if the most rampant emotion you’ve been experiencing lately is that of frustration and hopelessness? Maybe you want to do something – anything – to change something in your reality but you can’t. How do you deal with that?
1) Go on vacation.

It sounds counterintuitive. You’re obviously having a life crisis, and you’re trying to fix it. Dropping everything and going on vacation looks like you’re running away, and it’s easy to imagine there’s no point since everything’s just going to be the same once you’re back. But here’s the thing. Yes, maybe everything would be the same, but you won’t. In response to a similar situation, I remember someone telling me, “You’re feeling this way because you’re in the middle of storm. When you get out of the storm your perspective changes and you’ll think differently about it.” Taking a break from your daily life and unplugging from your routine not only gives you a time-out from whatever it is that is troubling you, but it could even expand your horizon and hand you a possible solution.

2) Think it through. Ok, you’re feeling frustrated about something, and you want to stop feeling frustrated. You wish you can go on a vacation but a break just can’t be caught. Think your feelings through. Are you truly helpless? Is there really nothing you can do about whatever it is that’s frustrating you? Discuss it with someone you trust and get a different opinion.

Alternatively, write it down. A friend of mine asked about journaling. Don’t you see it as a waste of time? They asked.

I told them, “You know what’s a waste of time? Keeping everything in my head, because I know I can really obsess over things for a long time.” It sometimes feels like my brain is inside a blender that’s continuously on. Until I write about it, that is. But I told them journaling isn’t for everybody. Some people talk through whatever bothers them. It’s just that because they tend to ramble, they really need a patient friend to listen to every idea that crosses their minds. My friend said they can’t always talk about stuff, and they didn’t have the patience for writing. I ended up introducing them to mindmapping and that seems to be working for moments when they need to take their brain out of the blender.

3) Accept that some things are within your control and other things aren’t.  Define the boundary between your circle of influence(things you can control) and circle of concern (things that matter to you but you can’t control)[ as was made famous by Steven Covey in his book 7 Habits of Highly Effective People]. Once you define your boundary, you need to accept that there are some things that will frustrate you but you can’t do anything about them, and that’s just the way the world works. Or as they say in urdu, dunya dari. 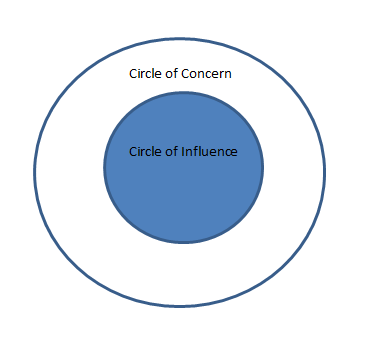 4) Do laundry with gusto. Turn your frustration to positive energy. Since you’re helpless about that big annoying thing you can’t do anything about, focus on the small stuff. Decluttering. Spring Cleaning. Do something, even if it is mindless.

5) Be present. Stimulate your senses. Live in the now. A lot of your frustrations happen when you’re inside your head too much. But the moment you start engaging with the world through your senses, it’s easier to let go of your worries. Listen to a baby laugh, have a tasty meal and savor the flavor, hug a teddy bear, walk through a Bath& Body Works store or as cliched as it might sound, wake up and smell the flowers.

This entry was posted in Inspiration, Life Lessons.

One thought on “Feeling frustrated or helpless?”

[…] a previous post, I spoke about being present and living in the now as a means to fix feelings of frustration. Sometimes it’s not easy to do that because the […]